Gary Vaynerchuk Joins Adam Posner on Episode 155 of The POZcast

Gary Vaynerchuk Joins Adam Posner on Episode 155 of The POZcast

Everyone has failures, and everyone faces rejection, but as successful entrepreneur Gary Vee tells Adam Posner on The POZcast on Episode 155, it doesn’t have to be your scarlet letter. When a person does not get accepted into college, loses their job, or faces other rejection, Gary Vee says, “A human being made a subjective call…Who cares? That doesn’t mean they’re right. It means that a human-made a subjective call…Many times, a company — including mine — has been wrong.”

While being fired or rejected can be disheartening, it’s not final. Gary Vee suggests owning any mistakes you might have made in the process and aiming to be better in the future. It’s a practice he models in his own business.

However, Gary Vee is quick to admit he’s not perfect. “Like I always tell people, just because I’ve had success doesn’t mean today’s not the beginning of me making a lot of mistakes.”

By recognizing mistakes he feels he and his company have made along the way, Gary Vee has improved over time. For example, he has actively worked toward guiding his employees better throughout their employment instead of waiting until the end to let them know their performance is unsatisfactory.

Gary’s company Vayner Media is also committed to making DEI&B a priority by recruiting more black leaders to join the team. This is just the beginning, though. As Vayner Media has accomplished this goal, it is moving forward to do more.

With such goals and plans in mind, how do Gary Vee and his company deal negative reviews left on sites like Glassdoor? The answer is simple: They “don’t play the Glassdoor game.” He uses Glassdoor as a tool for specific goals, but Vayner Media does not let the negativity get in the way of its success.

What career advice does Gary Vee offer? To be self-aware. Know what you love and follow that. Don’t follow a path for the money it brings. The money should be a by-product — not the main goal.

Gary Vee shares that building businesses is his passion – not making money. “Business is my love, but money is not my love…Money is a collateral aspect of my art. Money is an incredible igniter to my options…Money is not my love.” By being self-aware and chasing your love, you will feel much happier in your pursuits.

Being the CEO of Vayner Media and all that entails can’t all be cake and ice cream, though. There has to be some anxiety wrapped up in it, right?

Of course, there is, but Gary Vee shares an important viewpoint on this as well. “You’ve got to understand that until you feel like you’re a hundred percent in control of your life, you will always be vulnerable to anxiety.”

How does such a busy man and serial entrepreneur manage to cultivate his family life as well? In one word: “Practice.” Gary Vee knows the struggle of being an entrepreneur who is passionate about his business and how difficult it can be to turn that off when you’re with family. In his experience, the way to make it happen is through practice, practice, and more practice.

Gary Vaynerchuk has had a lot of success — and self-admitted failures — in his life. He is an inspiration in career and personal life. So what is the one constant principle he lives by daily that has helped him become the man he is?

Gary Vee says that the foundation can be traced back to his father. “My dad hates lying..hates exaggeration…This is why I’m empathetic…I really think reputation is everything, and so your word is bond.” He admits that without this principle, he would probably not be the same man he is today.

Find out more about Gary Vee, his thoughts on career and life, and his North Star by tuning into #thePOZcast! 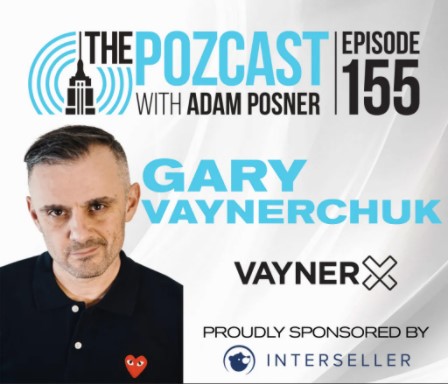